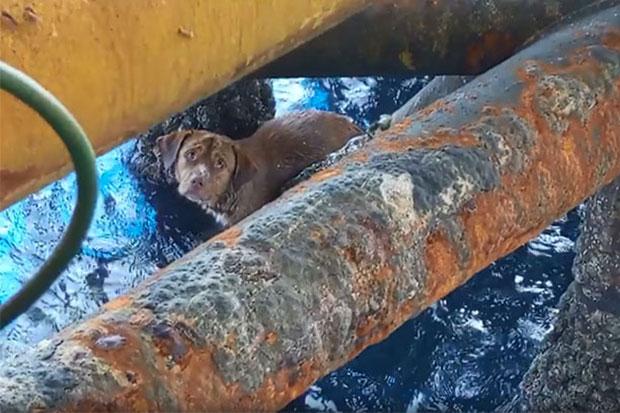 Imagine being on a ship, and then by some accident, tossed overboard. Perhaps no one knows you’re even gone. Perhaps there’s no way possible for the ship to stop and come to your aid because it has simply become too late, too fast.

Now imagine facing that scenario with four paws and 130 miles from land.

No one will likely ever now how this little guy came to be bobbing about the Gulf of Thailand, such a tiny speck in such monstrous seas, Imagine it from his perspective, what with only his four paws to keep him going, no idea where he was, no ability to call for help. When out of nowhere, someone spots this dot in the water and chooses to investigate. Damn near frightening, especially for a human being. 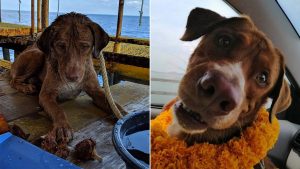 Somehow, this guy managed to beat the odds. Stranded in the ocean, eventually resigned to no longer being able to keep himself afloat, likely another victim of the sea. Not this time.

The dog, now named “Boonrod”, was saved by ingenious workers on an oil rig, who decided that one life was enough to warrant going that extra mile and doing whatever they could to save him. He’s now back on land, perhaps never to go near the ocean again, and hopefully one day soon he will find a forever home,

A story that speaks to the humanity that resides in all of us, to have that chance, and to save just one life. In this case, a life that perhaps deep in his doggy soul, he will always remember to thank the men who reached out in the daring seas to give him another chance at barking and playing.