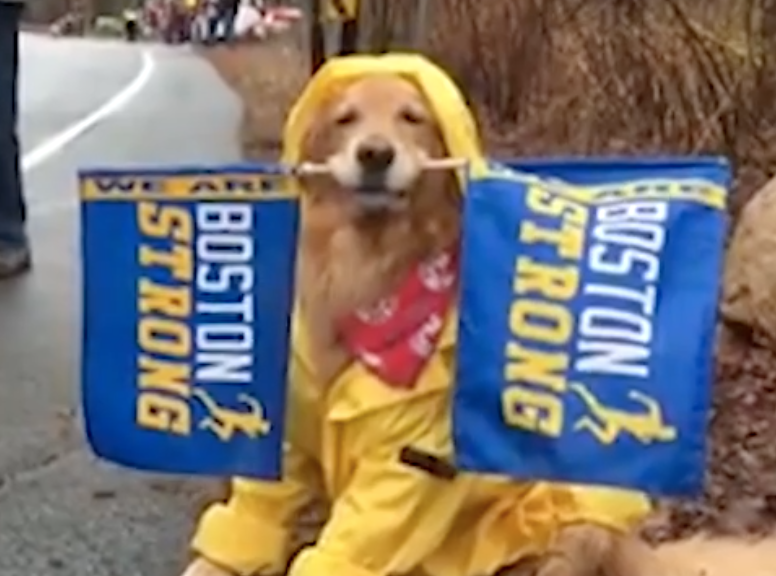 Having lived in Boston and calling it my adopted home, I can tell you from experience the love and emotion that pours forth every year come Marathon time. Every memory comes flooding back of that terrible day when a binding sports event became a moment in infamy.

Boston is one of the most resilient places I have ever been, and once again here in 2019, the “signs” were everywhere during the Marathon about how this community still refuses to knuckle under and allow evil to command their lives.

These specific signs I speak of are courtesy Rich Powers and his dog, Spencer.

Inclement weather doesn’t stop Spencer from his appointed rounds, being right there early in the race urging the runners and cyclists forward as they face the grueling marathon course. He dutifully holds his signs of strength and honor, as he has now for several years. His sister, Penny. doesn’t make every year because she just doesn’t like the rain.

Spencer has become part of the race, now. Athletes now look for him, and more than a few have commented on how that wonderful just holding signs clamped between his teeth gives them an extra push forward.

I’ll admit, there are tears flowing as I write this because it’s so difficult for me to talk about the Marathon anymore. The damage done to Boston will remain for generations. However, they are also tears of joy thanks to Spencer and those like him, whether 2-legged or 4-legged, who believe in the spirit of honor, love, and staying forever strong.

To all that have the spirit of Spencer within them, thank you.