They are brother and sister. They are our “kiddie-butts”. They are the light of our lives. I recently told their story on the 5th anniversary of their “Gotcha Day” via my Facebook page. Allow me to repeat those stories here with a little editing.

We woke up on this morning (June 22) 5 years ago (now 7 as I edit this in 2020)  in the sleepy town of Rome, Georgia. I had never expected in my life to be in a place where there was an actual replica statue of Romulus and Remus nursing from a mother wolf.

We drove about 20 minutes outside of Rome, winding up on a smallish paved road that took us deeper into the foothills of the Appalachians. There, Lady Shannon Sparks and I found the address we were looking for. A big ‘ole double wide on a small hill surrounded by trees and greenery.

The front yard was a slope to the road, fenced in and filled with the bounding energy of Norwegian Elkhounds. This was their play area, and they had plenty of it.

Just outside the back door was a smaller enclosure with several puppies. One of them had a tiny black collar around his neck. This was the one we had seen in pictures for several weeks.

We greeted the owners, a wonderful couple who had dedicated their lives to raising these wonderful animals, and went inside. After a few minutes, the pup with the black collar was on my lap. Honestly, I didn’t know how to hold him. All my life there were dogs in my family and around me, but never before had one been my sole responsibility from a tender age. He was only 10 weeks old.

“What are you going to name him?”, was the natural question.

I looked down at him, balanced him on my lap and said, “Magnus”. 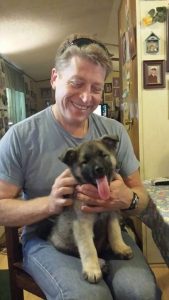 Thus began the love affair with our little boy. It was a day that changed my life forever. The tough son of a bitch that had long wandered the firmament had his heart melted and his attitude toward family and life altered forever.

Of course, there would be one more piece to this puzzle that would come the next day. But we’ll leave that for tomorrow.

He’s not so little anymore, now a happy, bouncing 65 pounds of healthy and lovable Elkhound. He attracts attention wherever he goes as people, especially kids, marvel at how “fuzzy” he is. He’s still my little boy, and often acts like every human child.

Last night when we went to bed, Magnus did something he has never done before. He came up on my right side, leaned into me around knee level and laid across my legs. Never does that. Always finds his own space on the bed. Yes, we broke that rule a LONG time ago. He laid there for a good ten minutes, and took his left paw in reaching out to my hand. Usually that means he wants attention. This time, he let it sit there and didn’t ask for anything else.

It was just odd that on this date, he chose that moment and that spot, almost as if he was stating “you’re not going anywhere, Dad”.

Magnus and his sister, Lady Bailey Beagle, change our lives every day. When we come home, they cannot wait to greet us. As I saw this week in returning from several days on the road, the welcomes are loud and I indulge every bark and every nuzzle.

I love you, my boy. Thank you for every second of every day.

And then, there is…….the next morning.

We woke the next morning at a sleepy little hotel near Daytona International Speedway in FL. We had driven the previous day from Rome GA with a 10 week old bundle of puppy fur and pointy eared wonder in my lap. I couldn’t stop believing this baby Norwegian Elkhound was ours. Magnus had become the first part of our family, and he was getting used to his new surroundings.

To this day, I am certain the hotel owners are cursing the baby puddles of mistakes left about the room. Try as we might, Magnus was just beginning to understand his new life.

We then drive to a small farm in rural Deland FL. Home of Stetson University and not much more, Deland is sleepy, non-descript, and more than a little boring. Nothing much to speak of. When the new Publix opened, it was cause for celebration.

Not much, save for the fact it’s where we first met Lady Bailey.

Lady Shannon Sparks had done the research, and we knew we were coming to place where baby beagles were born. We had seen a pair of video clips from the owners, and it was all about bouncing baby beagles playing on the farm with chickens and anything else that wandered by.

Her name was then Bree, in order to tall her apart, and the owner was able to herd them all together with a high pitched “RIGHT HERE! RIGHT HERE! RIGHT HERE!”. Trust me, there is nothing quite like watching a sea of beagles moving with tails wagging and bodies bouncing.

We knew the one we wanted, and the owner told us there was another one if we wanted to change our minds. Bree was born with a minor hernia issue that had been fixed, you see, and we had a choice.

We brought Magnus out and let him smell the new grass, the different air, and see the puppies running about. I stayed with him and pointed out the pups, his ears up as if to say “What the heck are THOSE???” He had never seen anything but Elkhounds before.

All the puppies were playing amongst themselves. Save for Bree, who walked up and greeted Magnus. The only one out of the bunch who was interested. Of course, Magnus was overjoyed to see this new ball of brown and white fur getting close.

There was no decision to be made.

Despite the owner reminding us we could choose from another beagle, and boy it was tempting to take them ALL home, we stayed with Bree. See, she chose us. She made the first effort. To this day Shannon believes the owner was convinced Bree was the smarter of the pups and wanted to keep her as her own.

Shannon had always wanted a beagle named Bailey. Here she was. Magnus’ big sister (by three weeks), was now a member of the family.

As I had spent the trip from Rome to Daytona with Magnus in my arms, Shannon spent the ride home with Bailey in hers. 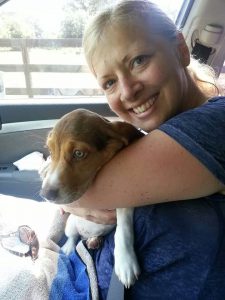 We made a stop at a local Deland flea market where my Dad was with his friends, and introduced him to his Godpuppies. After all, it was my Dad who found the beagle farm in his own backyard.

When we left, we were but two. When we came home, we were four. We came home a family. The journey of unconditional love had begun.

Bailey is the single greatest example of a love muffin one could ever imagine, She melts into our arms, cooing with affection and those nearly imperceptible sounds of contentment. Of course, as a beagle, she has her nose constantly to the ground looking for food, (you would swear she’s underfed by the way she’s always hungry), and the baying sound she makes when playing with Magnus or when approached by other dogs has people sometime asking, “Is she in pain?”.

No. She’s just being Bailey. Our little girl. Truly the apple of Daddy’s eye in everything she does.

Remember I told you about Magnus and his bedtop manner? Almost every night, Bailey snuggles close to my face in the right armpit. She’s stand there, take the loving, yawn a lot, and when done, she will turn, and facing the foot of the bed, she will nestle as close as possible to my right leg. That’s her place. It’s when I know there’s at least something in the world that is absolutely perfect.

So coupled with yesterday’s story about Master Magnus and his Gotcha Day, today being Lady Bailey’s Gotcha Day concludes the beginning of our family journey. It’s not always been perfect. There have been a lot of bumps in the road recently.

But every day, every second of every day, we have the 2 most beautiful, wonderful, loving fur kids we could ever imagine. I will always believe they found us, and every day they rescue us from a world that overlooks such tiny, wonderful moments. 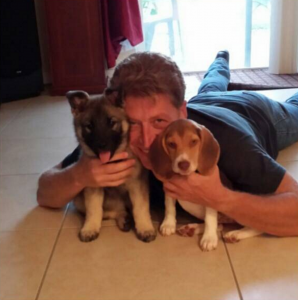 As I mentioned yesterday, go hug your kids, 4 and 2 legged. Revel in every moment they bring to your life. Protect them with every ounce of strength and muscle you can, because whether flesh or fur, these kids depend on us for so much. We are their protectors. We are their champions.

We are their Mom and Dad.

I, for one, and we for two, couldn’t be more blessed.